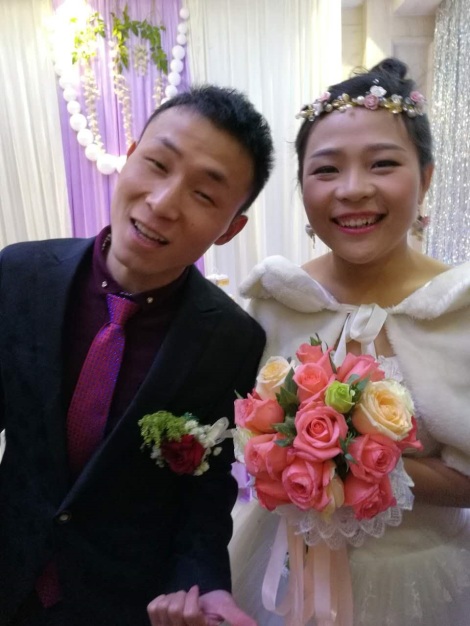 Many of you remember my post about two young people who worked for the coffee shop I frequent here in China. The young man got down on one knee and proposed in the front area of the store. Chinese guys don’t often do this! Well, the wedding day finally arrived.

Jan 15 was actually the 18th day of the lunar month and was a very auspicious day for a wedding. On our way to the venue we saw many wedding processions and gatherings. The sound of 18 sounds like the same word for prosperity so the bride’s father insisted on this day. 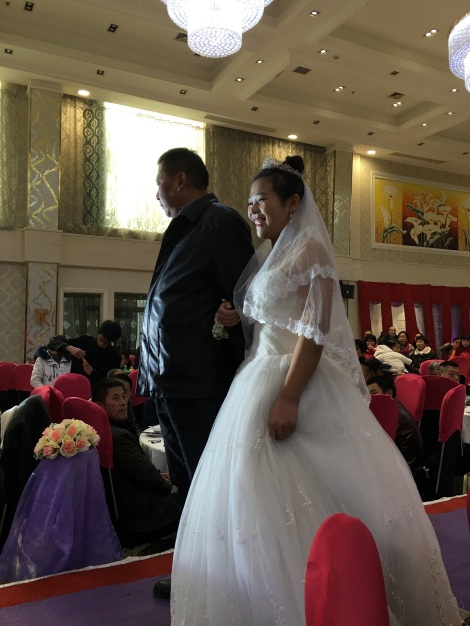 The venue was ornately decorated and filled with people! No heat but we all sat around in our coats and waited for the festivities to begin. The downside was that smoking was allowed and boy do Chinese men like to smoke!

When the bride was presented on the runway her groom came and knelt before her once again and pledged his undying love for her and promised her father he would take good care of her. 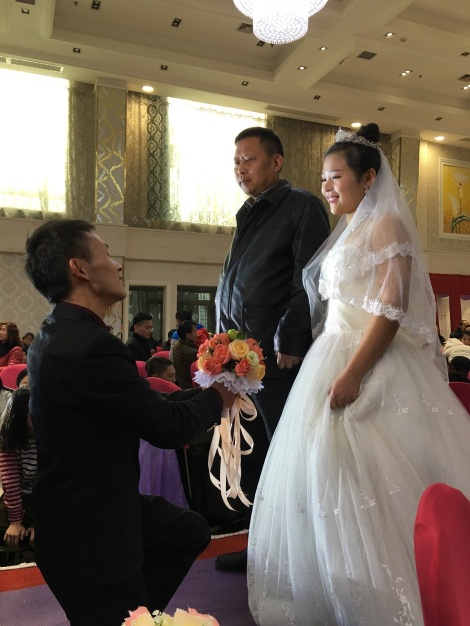 We had great seats! All of the announcements were in Chinese, of course, so we weren’t sure what was happening all the time, but after a fashion the couple made their way to the front of the stage to a magnificent cathedral backdrop and beautiful music. 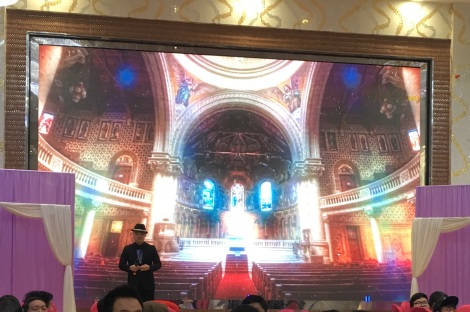 The MC sang songs, interviewed the groom, and narrated the tea ceremony where the bride serves her new in-laws. 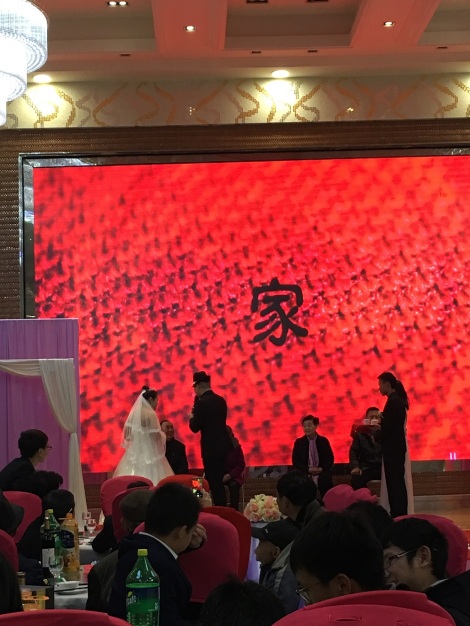 The small character on the screen is the word for family/home. It grew bigger and bigger until it filled the screen and then started all over again. The screen was sometimes filled with a scrolling power-point of the couple’s engagement pictures but often had swirling psychedelic shapes that could make you dizzy if you stared too long.

There were many foreigners there due to the fact that the couple worked at the coffee shop and the bride was a French major in college. We were all called up at one point to have our picture taken with the couple. Half the room came surging forward to get their own pictures of the unusual guests. 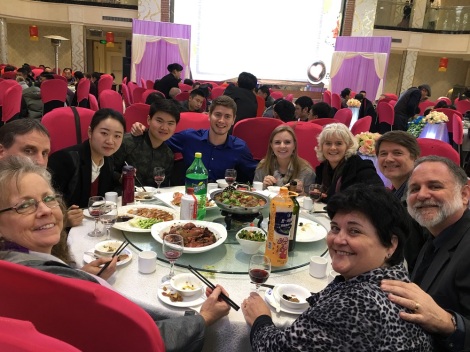 The food was amazing! There were a total of 16 dishes brought out. It just kept coming. There was mainly meat dishes, no rice, and lots of interesting stuff. Cow’s stomach and seaweed, pig stomach in porridge, soft-shelled crab and turtle, a whole fish prepared sweet and sour, fish and pork balls, duck, chicken, beef, etc. 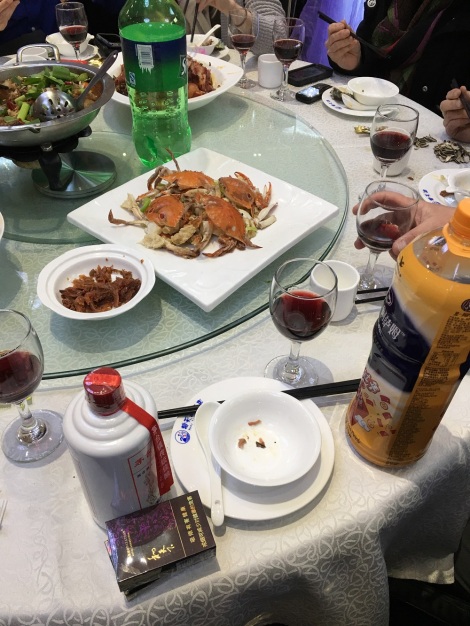 Red wine and ‘white’ wine i.e. strong alcohol, not your idea of white wine,was served for the toasting. Cigarettes were provided for our enjoyment (they also came in the goody bag we all walked out with). A good time was had by all! Cough! 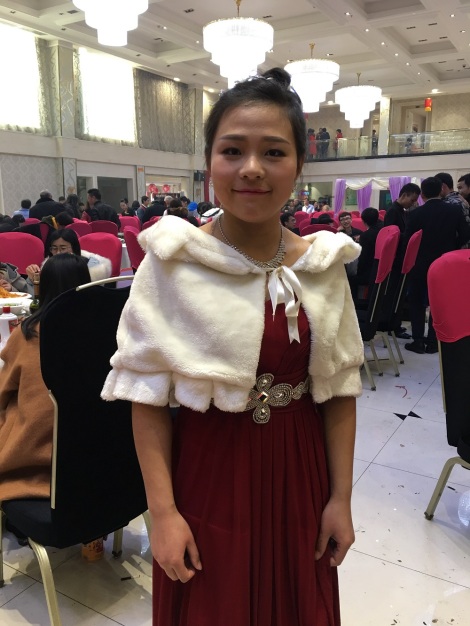 While we were all eating, the bride was changing into her red dress. and then the toasting at each table began. Many times the couple has a water filled white wine, so they aren’t stinking drunk by the time they get to the last table. There were well over 50 tables in the banquet hall. We wish this young couple every happiness as they journey together in this time of change and adventure we call life! Gan bei! 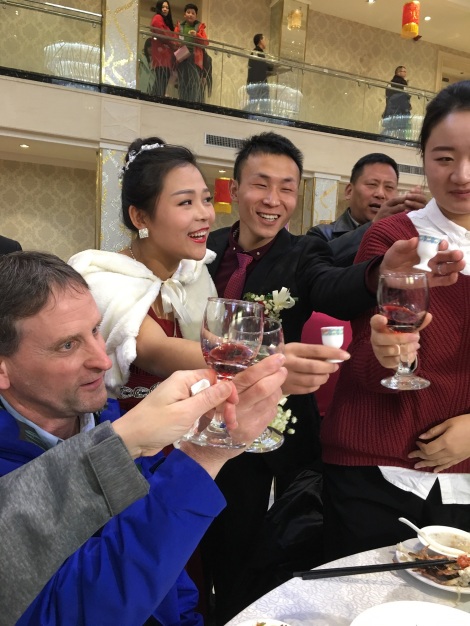 2 responses to “It’s a Love Story”

When we said it

How we said it

What we said before